Calendars from the past - Historical uniforms

here are three scans of a collection of calenders that had been available in Germany in the sixties, seventies and eighties of the last century.
I bought them on flea markets and on ebay several years ago and stored them on our attic for about 15 years because I couldn´t find a place to hang them.
And I´m still unable to find a good place.

Today I remembered of these calendars and also the old albums filled with the very popular uniform pictures they used to sell with cigarettes in former times.
These treasures sometimes hide very interesting pictures or paintings of special troops or ranks you sometimes can´t find in books or the net.

The calendars I´m talking about had been released by a publisher settled in Munich and Vienna.
The aquarelles had been painted by the artist Wolfgang Tritt (1913-1983) and are really beautiful.

The last picture could be very interesting for my friend Christopher (aka Axebreaker) showing an officer of Russian hussars of the SYW. 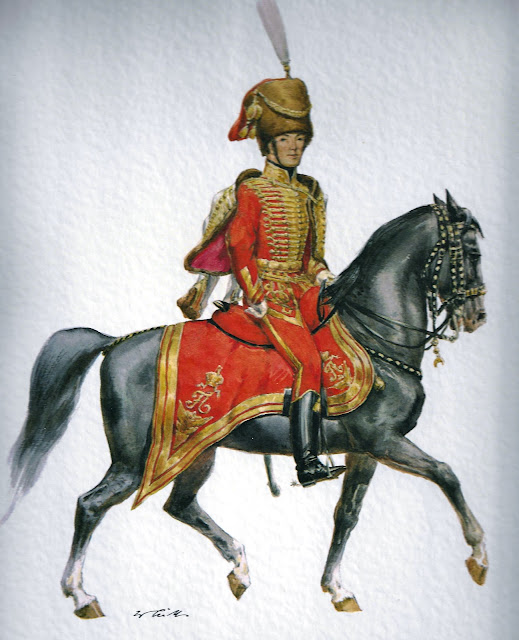 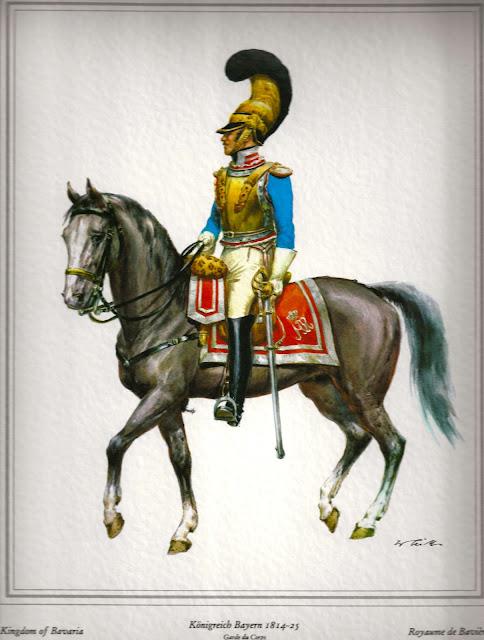 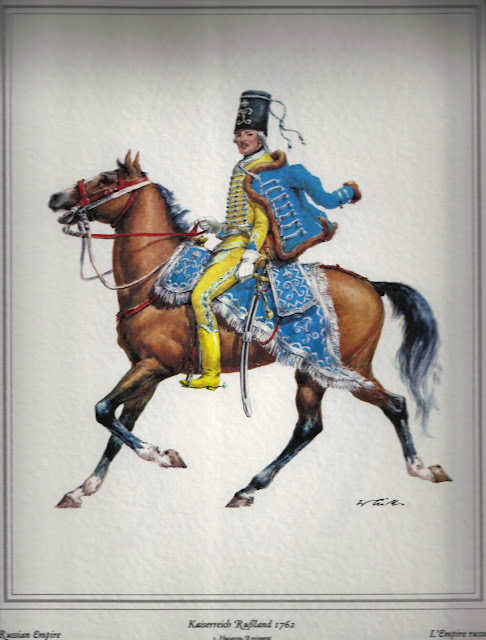 Email ThisBlogThis!Share to TwitterShare to FacebookShare to Pinterest
Labels: Hobby in general, Uniforms

On January 6th in Bavaria the Christmas season ends and almost every family throws its Christmas tree away.
But we don´t do that like IKEA told us in a merchandising spot a few years ago.
We don´t celebrate "Knut". :)

We have a fireplace in our living room and so we always cut down the branches and put them into boxes to stir them up gradually.
This is the work I´m doing while my wife does the packaging of the decoration and the cleaning
(sorry, Karin).

Within the last few weeks my fever for French and Indian War inflamed again and I´m often thinking about possibilities to get nice terrain like woods or block houses.

Cutting down the tree today I recognized that if you strip off the fir needles from the branches the structure looks best for my tinker-project that I decided to keep some of those branches.
I won´t have to use skewers which need to be provided with a structure to look realistic and I even
won´t have to paint them - the branches already have the most natural colour.

Okay, maybe some of you already had this idea but for those who didn´t just think about it.
Don´t celebrate "Knut", just recycle some parts of your old Christmas tree.

Yesterday I posted a picture of the first Pennsylvania Provincial for our FIW-project.

I don´t know how firm you are with the therefore used manufacturer "Galloping Major" and this was also the first figure from this company I´ve ever painted.
I like these figures very much for they are very fine casted, don´t need much cleaning and are great fun to paint.

But it is always good to know how the miniatures fit with ranges of other manufacturers.
So I just took a few photos to show a comparison of the figures of the period of FIW I already painted up for my collection.

There are also some other ranges within my collection like Northstar or ConquestMiniatures which are purchased by WarlordGames.
But I didn´t paint some of these figures yet and so you won´t find a comparison here.
As soon as I did this I will also post some comparison pictures as reference.

There is also another good manufacturer called "Redoubt Enterprises" who also has a FIW-range.
I don´t have Redoubt in my collection yet but I think that they would fit very good with Galloping Major.

The first picture shows a comparison with the newer British SYW-range from WargamesFoundry.
I painted these figures about 3 or 4 years ago and to be honest, I didn´t want to use them for gaming as they are a little too big and the faces are a little bit comic style (could also be because of my painting).
They didn´t really fit with other manufacturers.
But compared with the figure of Galloping Major they do fit very well in my opinion.
Not concerning the faces but the height and scale.
I bought some of these figures on ebay a few years ago and now am very happy that I found a good use for them.
So the British forces for FIW are already on stock by now. :)


Though the next figures from WargamesFoundry aren´t FIW but SYW I think that a comparison to GallopingMajor might be useful.
These Prussians are from the former ranges of WargamesFoundry and are smaller than the British SYW-range shown on the first picture.
As you can see the miniature of Galloping Major is sized between both ranges.

Next there is a comparison to AWI-figures from WargamesFoundry which are similar in size to Perry ranges. 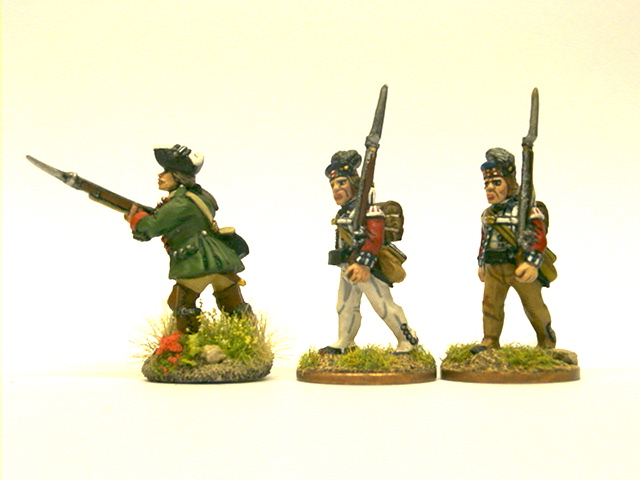 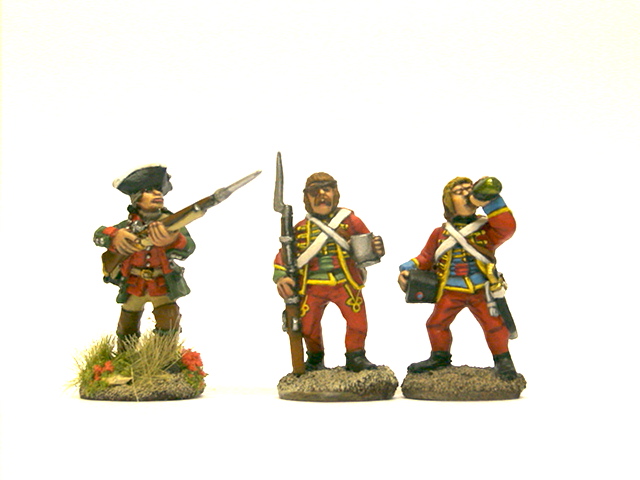 The last photo shows the differences to the beautiful and my beloved SYW-range of FrontRank.
I wouldn´t mix the different ranges within one unit or base but certainly both ranges could exist on the same wargaming table in different regiments. 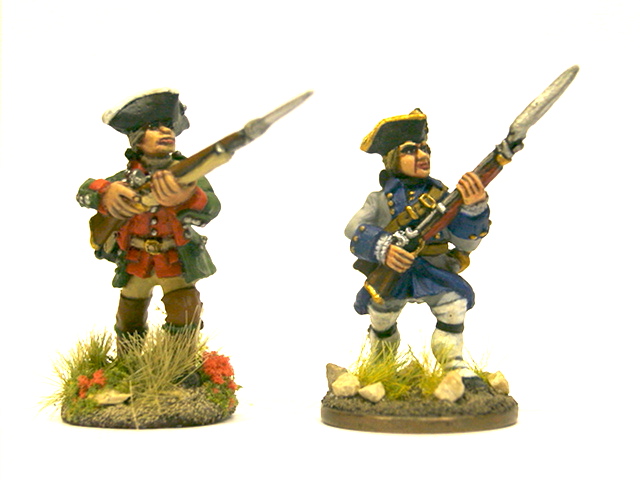 My friend Christopher and I are planning to have a closer look on the rules of Muskets&Tomahawks as we would like to game some FIW some time.

As Christopher decided to concentrate on the French forces of the FIW the British had been left for me.
And it is a good choice as I like the British uniforms of that period very much.

For the first unit I chose the Pennsylvania Provincials and found this unit on the helpful sites of "kronoskaf".
http://www.kronoskaf.com/syw/index.php?title=Pennsylvania_Provincials


Here is just a short post of the first figure I painted up just to test how the colours work.
The base might look a little bit overloaded but I wanted it this way as the FIW was often fought in the woods.

Again I´m not satisfied with the quality of the pictures.
I hope the photos of the finished unit will be better. 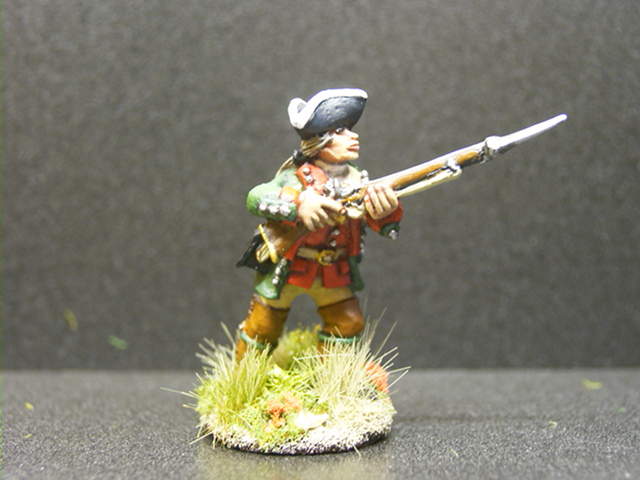 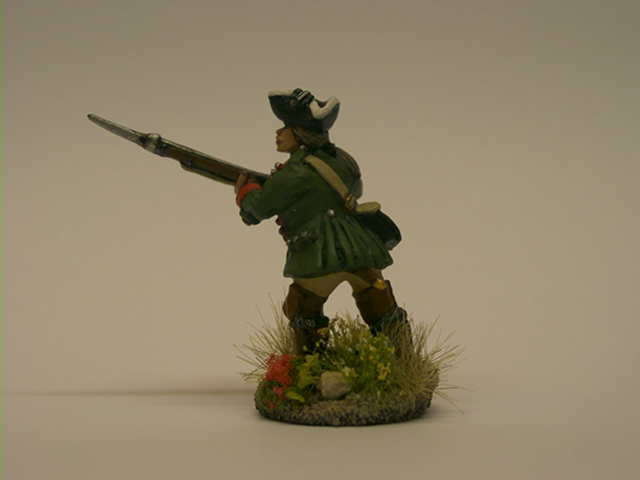 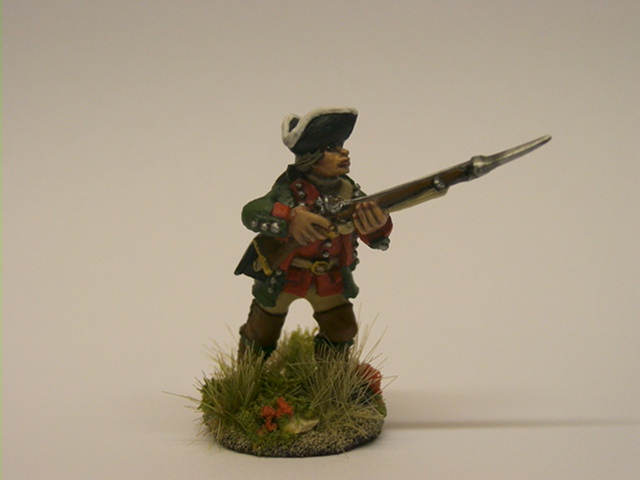 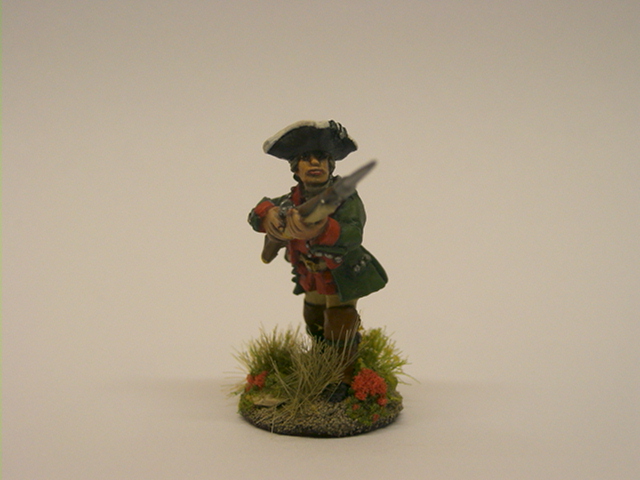 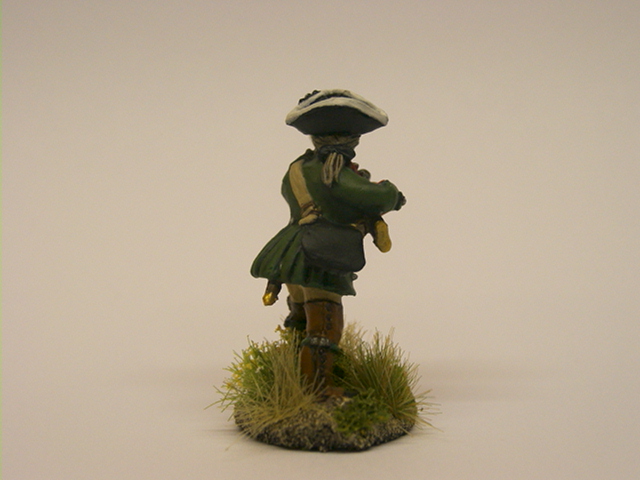 As it is always a kind of ritual to think about the projects to realize within the new year I also made up my thoughts.

Again the differnt aims are very ambitious and I wonder if I will be able to fulfill the plans.
Once a very wise man said that every long journey or in my case every big project starts with the first step.

The first day of the fresh year enabled me to finish the markers for BlackPowder.
A very small project but it's finalized now.
So the first step is done and there are at least another 364 days left to keep on the other projects. ;)

And here are my plans:

15mm projects:
- complete the roman republican army though I'm not painting them by myself
- complete the macedonian army also being painted by Krisztian from Hungary

28mm projects:
- learn more about the following rulesystems
- BlackPowder
- Hail Caesar
- Impetus
- Pike&Shotte
- Maurice (I was happy to hear that my friend Christopher aka Axebreaker will give it another
chance)
- Muskets & Tomahawks
- OperationSquad
- work on the painting projects
- paint some more Austrian units for SYW
- paint also some more French units for SYW
- start with the Prussians for SYW
- work on the British troops for Muskets&Tomahawks
- paint units for Republican Roman Army (Christophers antiques need some enemies)
- do some Japanese for OperationSquad
- let my Perry Plastics concerning ACW being painted by Krisztian (42 Zouaves will be sent to
him this week)
- build some terrrain for the Pacific scenarios for OperationSquad.

Let's do the next step tomorrow.