today I am posting about my newest expansion to my Austrian SYW-Army - five pieces of artillery.

Yesterday I managed to give them the needed bases and so they are ready for action against their Prussian enemies.

The Commander and his fellows on the other single base are painted up by myself. 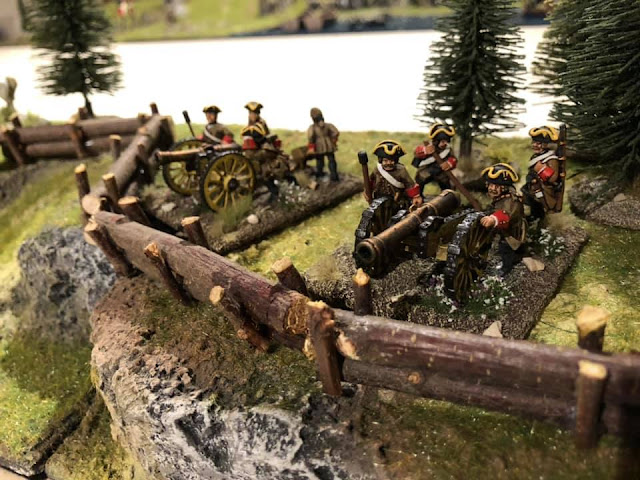 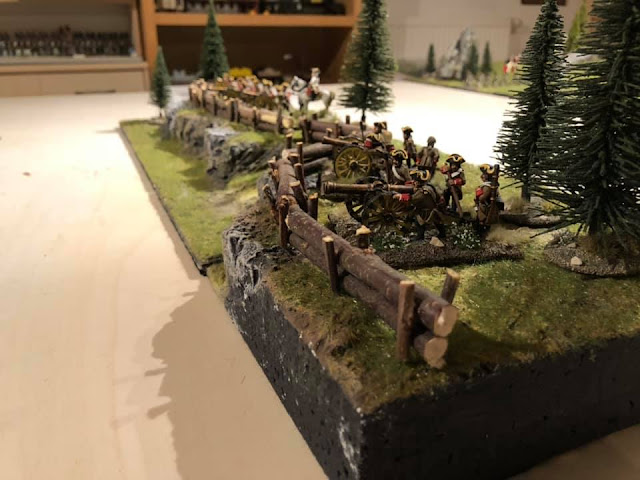 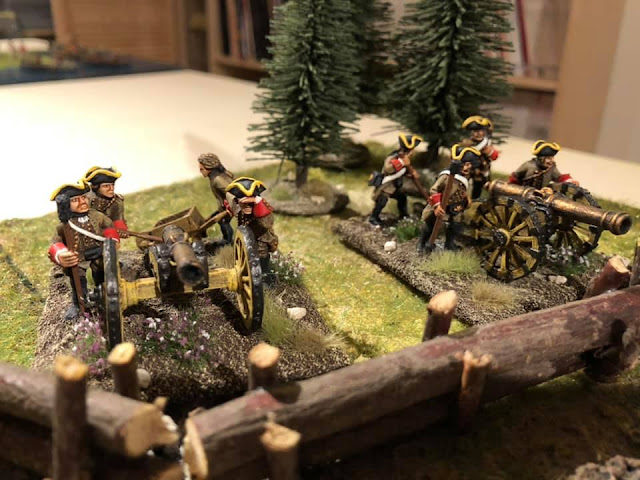 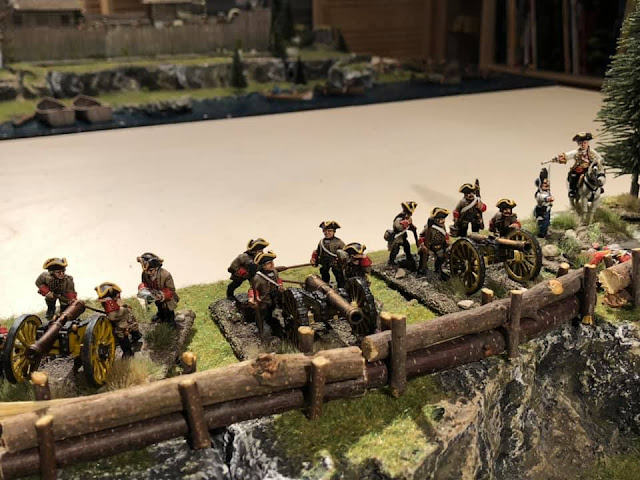 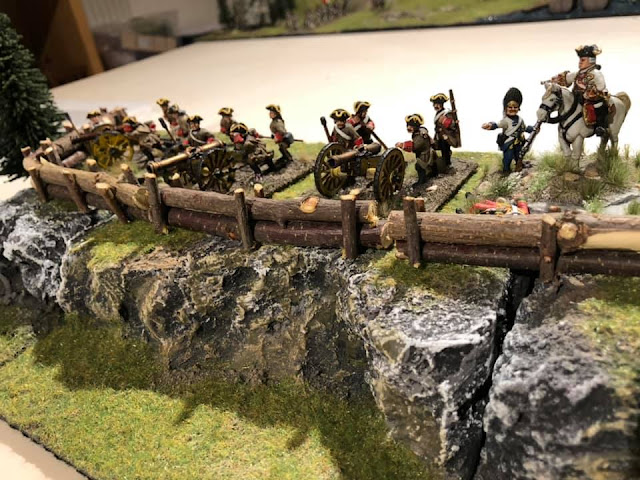 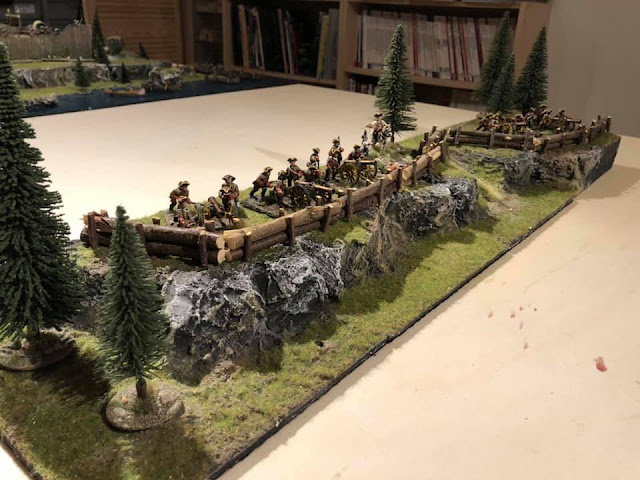 "The Fort" - not by Bernard Cornwell, but by Mike Spanuth

in this post you will find some more pictures of my selfmade "Fort" for the French and Indian War.

I started this project last year in July and the fort had already been finished in October or November last year as I remember. I wanted to have a modular fort so I could arrange it in different ways for different sceanarios. Once a larger one and once a smaller outpost. That was the idea and here is the result.

After having finished the moduls of last year I recognized that the produced moduls won´t allow many variants in arranging the fort. The picture above shows the smallest version of the "Fort" with the first elements. I wasn´t able to create the fort without using the tower sections. For some scenarios this might be too large.

So - what to do - I had to produce more moduls in different shapes. And this is the result.

Though the fort is "ready" now, I am sure that there will be some more elements that I want to make.
I have shown the new elements in one of my last posts. This time they are finished with painting an basing.

The fort now has the following elements: 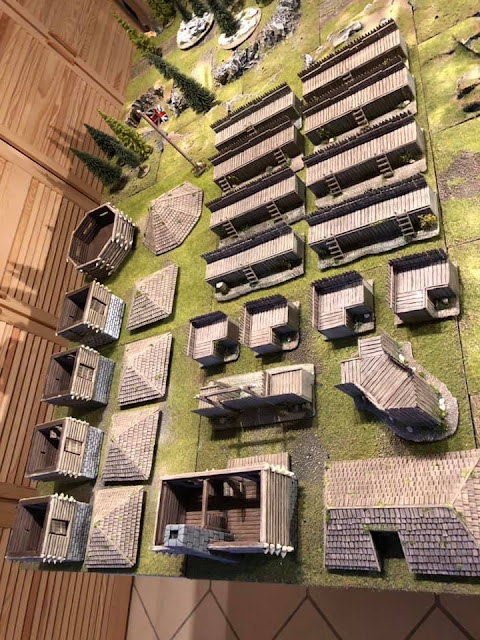 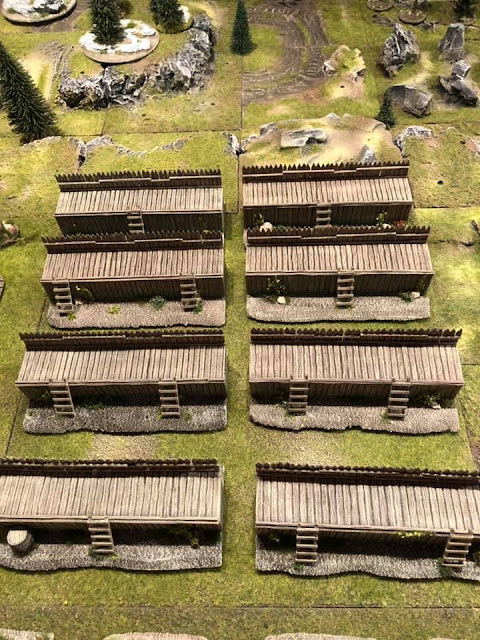 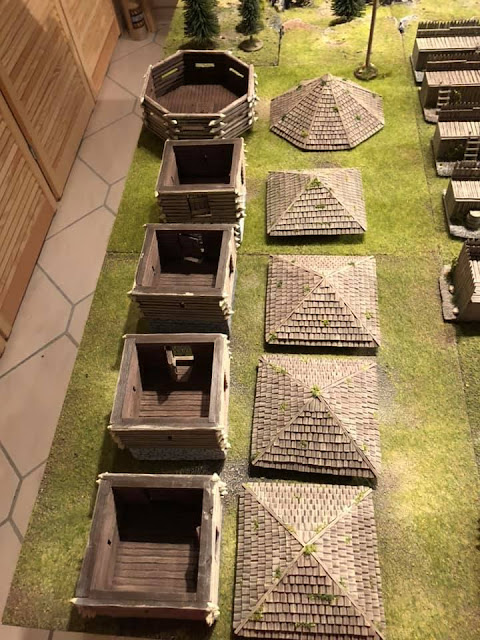 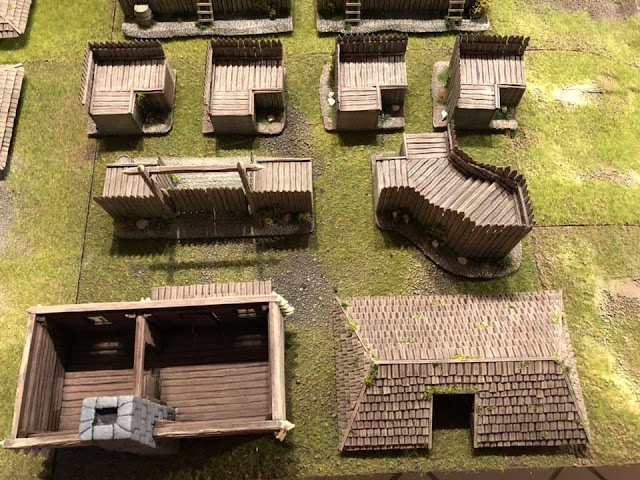 I am happy because of the fact that this is a modular terrain. This means that I will be able to work on extensions if I want to, but for it is already ready for action I won´t have to.


What could be next is


What should be next is


That is what I might do if I have the inspiration.

I would be glad if I was able to say this about other projects. :)


Here are some pictures of the possible combinations of the elements of the "Fort".

Please notice that these pictures are just for testing the possibilities and they don´t have historical background.


The following pictures just show the other possible combinations.

I am really happy with the result. 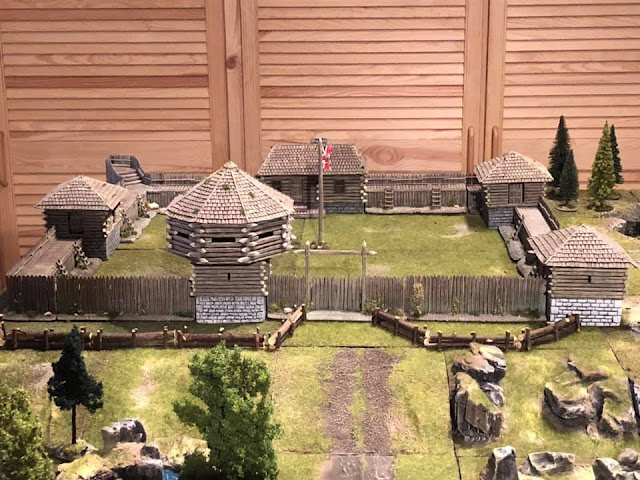 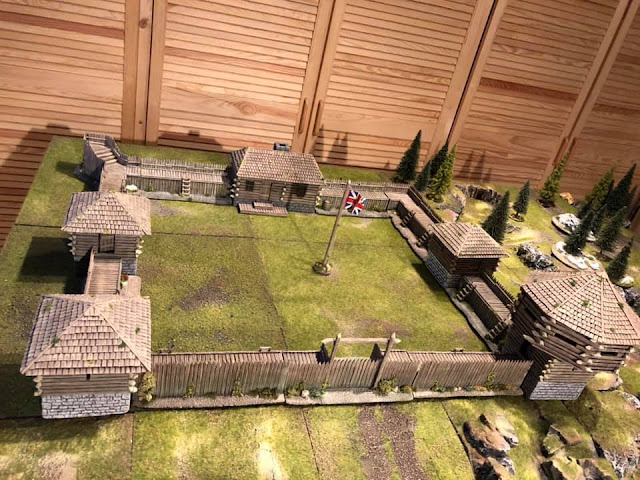 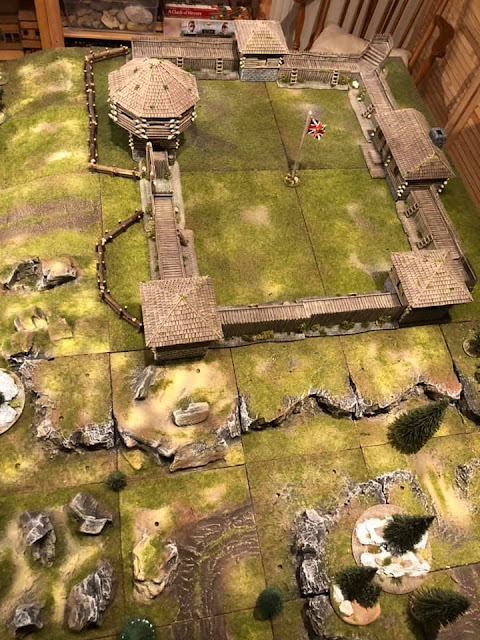 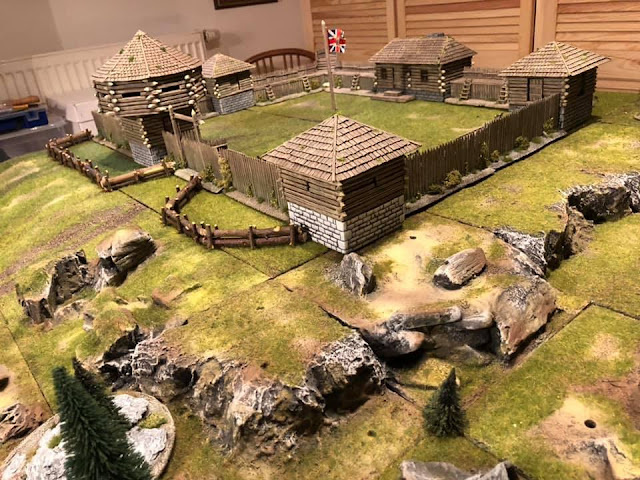 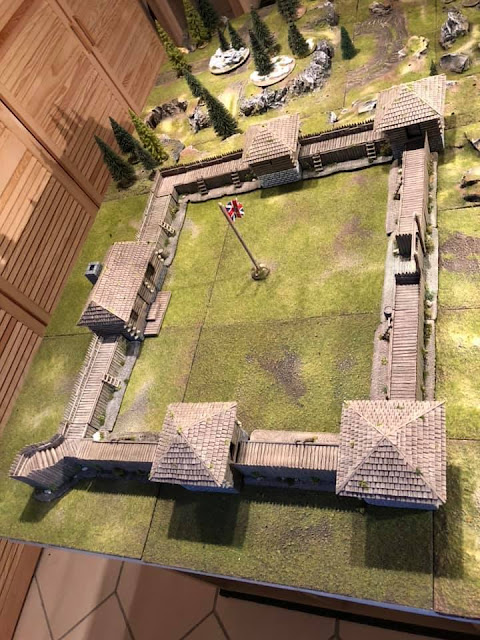 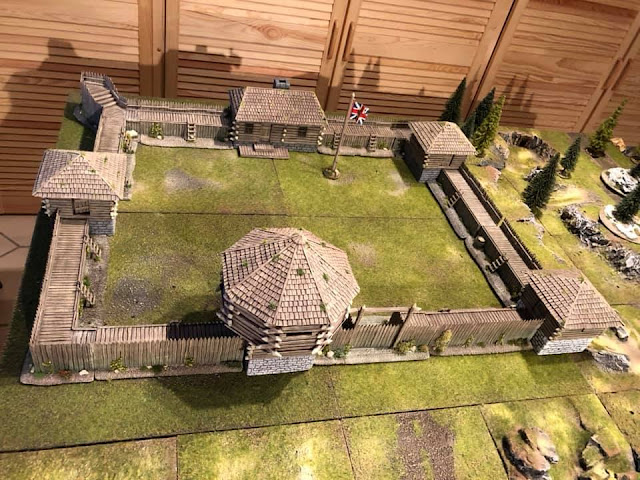 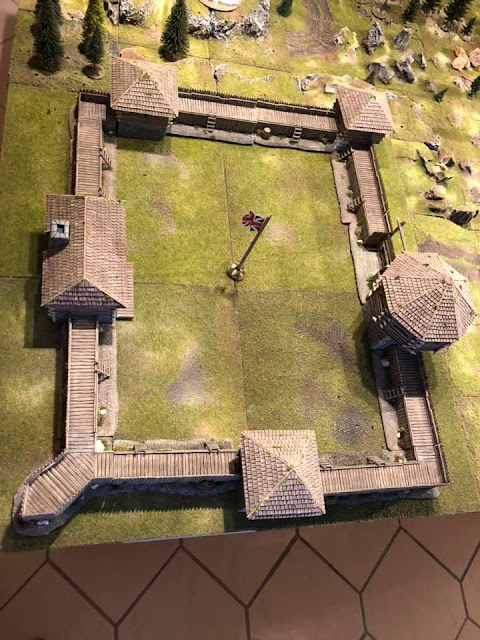 As I got a lot of positive comments within several Facebook groups the only thing I missed was to make moulds of this segments just to cast the segments and to sell them.

While writing this post I have a lot of further ideas for more segments. So - maybe to be continued.

Email ThisBlogThis!Share to TwitterShare to FacebookShare to Pinterest
Labels: 28mm, Do it yourself, FIW, Hobby in general, Muskets&Tomahawks, SYW, SYW in general, Terrain

Last saturday Gerhard, Sebastian and I had a great battle between French and British troops, about 450 points each force.
The French had the order to burn down the Iroquois longhouse while the British had to get the supply Waggon into the fort.
Two units of french regulars and one unit of Canadian militia had to fulfill this order.
The supporting Hurons had to start in canoes and to cross the lake before they were able to fight the Waggon train defended by a unit of provincials and a unit of light infantry. Another unit of Canadian militia already was set up in the ambush.
The fort was defended by one unit of provincials and a unit of British regulars. The longhouse was protected by a unit of Iroquois warriors.
The game went very close at the beginning.
The Hurons had been lucky to reach the coast of the lake very soon and started to support the Canadians in the ambush.
The wagon was on its way and it would be very difficult to break through the enemie‘s lines.
So the British regulars started to march from the fort towards the foes and started to attack the Hurons and Canadians from the rear.
The provincials left in the fort started a fierce firefight with the French regular troops and disabled them to get closer to the Iroquois longhouse.
The left Canadian unit got into firefight with the Iroquois defending the longhouse and managed to break their lines. The Iroquois once started a melee but had been driven back and also complete defeated.
So the Canadians were able to set the longhouse on fire.
Meanwhile the British regulars drove back the second unit of Canadian militia and were in a fierce firefight with the Hurons. The provincials and the wagon had the chance to walk further to the fort and the light infantry also covered their march.
But from now on the luck was with the French.
The British light infantry failed a morale test and left the battlefield.
The Canadian unit that burnt the longhouse came to support the Hurons and so the British regulars got fired by both sides.
The troop was reduced very quickly and finally was shot down.
The remaining officer started a melee with the Hurons and killed one warrior before he was shot down by the Canadians.
As the British force already had to put the morale card in the card deck it was a question of time when the force will be broken.
The provincials in the fort weren‘t able to pin the French regulars and at least one unit of French marched into the fort.
The last units of the British were the provincials that both failed their morale tests.
So the French Not only burnt down the longhouse but also captured the supply wagon and the British fort.
A total victory for the French but als a very funny game again. 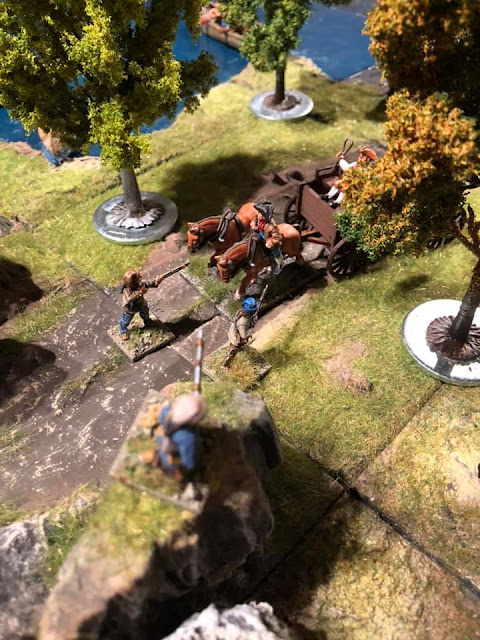 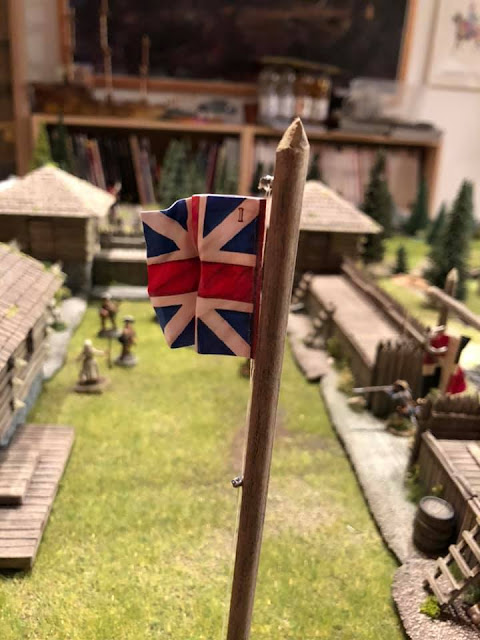 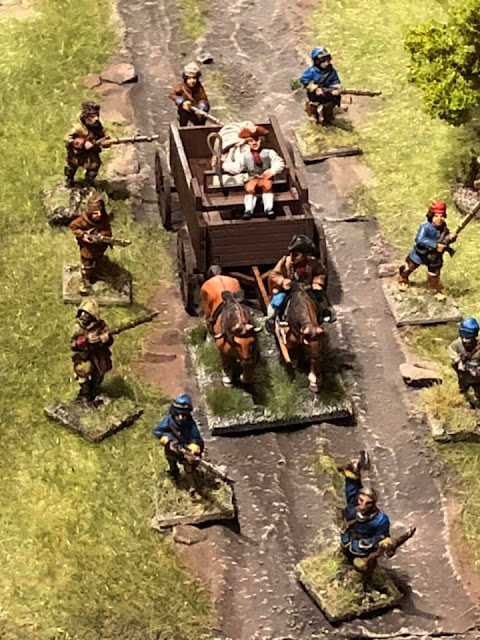 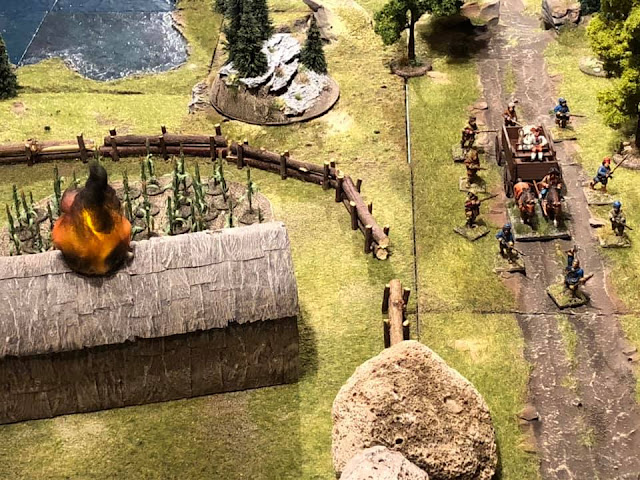