Slaughter in the wilderness - Another game of "Muskets&Tomahawks"

Hi,
last friday we met at Walter´s house to join another exciting game of "Muskets & Tomahawks".
Walter had already placed a beautiful gaming scenery with a farm and a watchtower.
The farmyard with its cattles, sheep and haystacks looked very cool.


Franz joined a game of "Muskets & Tomahawks" for the first time and so we explained the rules at first. As he is a very experienced wargamer and the rules of "M&T" are easy to learn it didn´t take much time.
Franz and Walter chose the French Army while I had to deal with a British force. On the pictures you will see some Hessians. They didn´t fight in the French and Indian War but we didn´t have the suitable figures for a unit of Provincials.
French Army List:
1 Officer (Regular, Pistol, Talent "Energetic")   -  30 Pts.
8 Regular Infantry (Muskets, Firing Line)   -   64 Pts.
8 Comp.Franches de la Marine Regular, Musketss, Firing Line)   -  64 Pts.
5 Indians (Muskets, Scouts, Natives)   -   35 Pts.
5 Indians (Muskets, Scouts, Natives)   -   35 Pts.
8 Canadian Militia (Irregular, Muskets, Scouts)   -   72 Pts.
Total Points  300
British Army List:
1 Officer (Regular, Pistol, "Hunter" and "Tactican")   -   35 Pts.
10 Regular Infantry (Muskets, Firing Line)   -   80 Pts.
8 Light Infantry (Irregular, Muskets, Scouts)   -   80 Pts.
9 German Mercenaries (Provincials, Muskets, Firing Line)   -   63 Pts.
6 Torries (Provincials, Muskets, Auxiliaries, Scouts)   -   42 Pts.
Total Points   300
The objective for the French force was to slaughter the civilians.
The British force had to scout all sectors of the table and leave the board with at least a third of the units on their table edge.
This were accidentíally the same objectives as in our first game - only with changed forces.
We also decided to add one event card into the card deck and also wanted to roll for two side plots.
The French side plot:
"It is not my fight anymore"
During the deployment determine the table edge that is farther away from your officer. Your officer must leave the table by any point along this edge to fulfil the conditions of this side plot.
The British side plot:
"Payback"
Choose any enemy officer. If that officer is killed during the game, you have fulfilled the conditions of  your side plot.


These side plots had been determined randomly by rolling two D6 and suited perfectly.
So, let´s start fighting.
The French force was allowed to deploy on the board completely. Depending on the objective "scouting mission" the British units had to wait for their deployment. They were allowed to enter on the first activation of each unit.
I was lucky for the activation cards for my units had been coming soon. So I was able to deploy my troops rather quickly.


As the Regulars don´t have good abilities in movement concerning rough terrain I chose to bring the Hessians and the British Regulars near to the farm and the watchtower as quick as possible. The talent of my officer ("Tactican") also gave me the ability to activate my Regulars for two actions dropping the card "Forward Boys". I decided to let them march on the road. The Torries and the LightInfantry had the traits "Scouts" and would be able to sneak through the woods without penalties.

On the other side Franz and Walter divided their forces with Walter controlling the Officer, the two Indian warbands and the Regulars. Franz played the Companies Franches de la Marine and the Canadian Militia.
As the objective of Franz and Walter was to slaughter the civilians I had to play the five civilians, too. As soon as the relevant activation card was dropped the civilians splitted and three of them got into the farmhouse while the other two figures entered the watchtower.


After some activations one of the warbands managed to get close to the farm house. One of the warriors shot through a window on the rear and killed one farmer. The reaction of the left civilians was a flight and they tried to run other the road to take cover. But the Indians got another activation entering the house there they took cover for the British Regulars also came closer to the farm forming a firing line.

The Indians again had been activated and fired at the fleeing civilians causing another casualty.
Meanwhile the French Regulars had entered the area behind the fences and walked between the cattles.
Now it was time for the first event card. Again randomly determined by rolling two D6.
"Some men have spotted a patch of unstable ground"
Randomly determine one of the involved Players. This player may place a patch of VeryDifficultTerrain (up to 6"x6") anywhere on the table. This piece of Terrain does not affect line of sight.
Rolling a D6 just allowed me to place this piece of terrain. The French Regulars had now entered a swamp of cowpats making them sitting ducks.
As soon as my British Light Infantry got activated they took the chance to shoot at the French Regulars. Though it was long range I got a very lucky roll. Five French Regulars were killed by this volley. The reaction was a recoil.

In the centre of the scenery my Regulars and Hessians got close to the farm and the watchtower forming two firing lines. They waited for their foes to come into range. 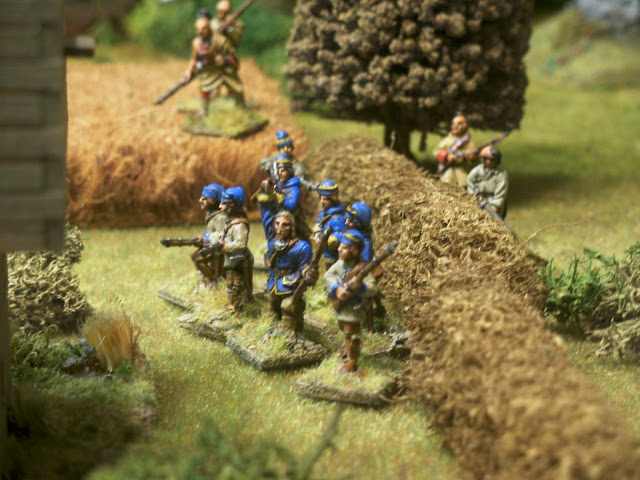 The French Marines and the second Indian warband tried to reach the watchtower where the other two civilians already went up to the first floor.
The Marines took cover next to the tower and had to realize that an activated civilian is also an enemy you have to fear. The civilians fired at the Marines through the embrasures and caused one casualty. But the Marines showed no reaction and didn´t leave their position.


Unfortunately there are no more pictures to show, but the fight went on to be very fierce and bloody.
After several volleys on both sides the Firing Line of the Hessians and the British Regulars broke. The Hessians had only three men left and only four more Regulars held their ground. But also the French Marines had only five men in their unit.
The British officer lay dead on the ground shot by a volley of the French Militia which was driven back by another volley of the Redcoats.
The Indians within the farm house just killed the last fleeing civilian before he was able to get into cover.
The other warband consisted of four men and still tried to ouflank the British troops.
The Torries also had lost one man and tried to discourage the warband from outflanking.
The two civilians still stayed on the first floor of the tower firing with no more effect.
The only unit that didn´t suffer any wounds was the British Light Infantry.
And the French officer was also still alive.
But both sides had suffered many casualties and so both morale cards had to be shuffled into the card deck.
The fight reached its climax as the French Marines started an attack on the Hessians before they could get into the tower. My plan was to support the civilians by bringing the Hessians into the building. The melee killed at least one Hessian and also one Marine. The hand-to-hand-fight went on and another Hessian got lost. The reaction of the unit was a flight.
The French managed to get into the tower and with their next activation they would get into contact with the civilians.
The result of the game was a victory for Franz and Walter. The Civilians failed their morale test and so Franz and Walter fulfilled their objective. All Civilians had been slaughtered or had left the table.
We all enjoyed this game very much and gave it two more rounds as we wanted to try if we could also fulfill our side plots. Their officer was still alive and had to reach the other side of the battlefield. If my troops would be able to kill him the side plot of the British Force would have been fulfilled.
Though the British Light Infantry tracked the French officer and got closer and also the four British Regulars tried to stop the French officer within short range of their muskets the card deck gave an activation for the French officer first and enabled him to leave the board without any scratch
The rules of "M&T" are very nice, the activation of the units by dropping cards makes the game exciting. I´m sure that we will have a lot of more interesting games to play.
Cheers
Mike

here are four Hastati for my Republican Army for the rule system "Steinhagel", that I finished yesterday. Again the base is not ready but the figures are covered with paint.

Hope to get the four missing Principes finished next week so my unit of 12 is going to be complete. 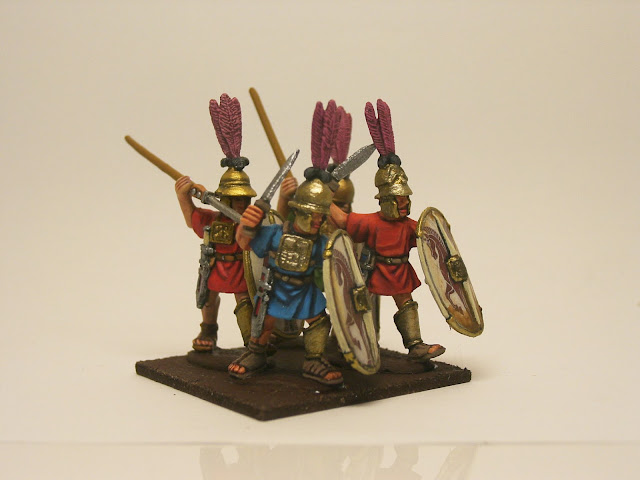 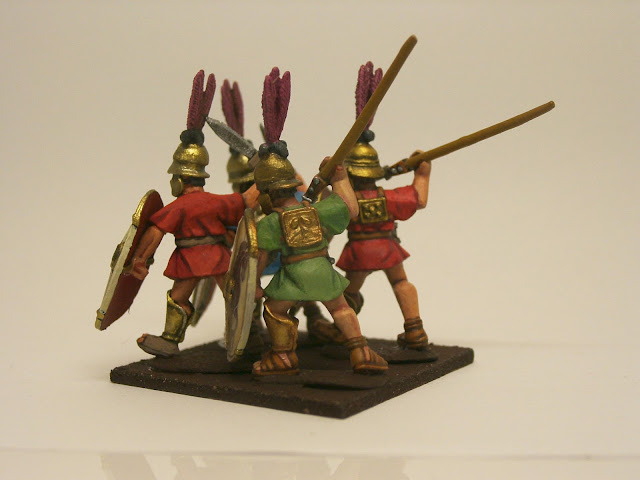 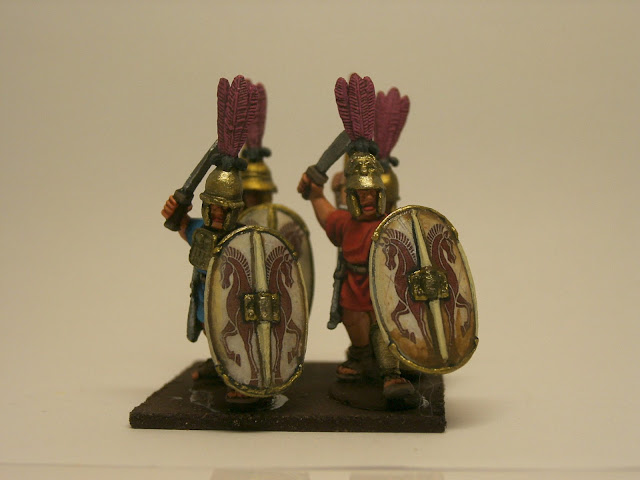 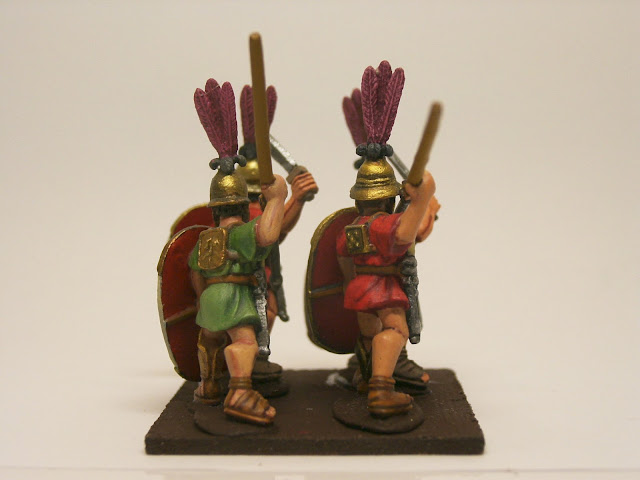