in November I posted a WIP about the Bavarian Regiment Minucci a friend of mine started to paint for me.

He has finished this regiment about one month ago. It took a bit longer because 4 figures had been missing and had to be organized.

Only the basing was done by me.

This unit shows the grenadiers of the regiment. I know that grenadier units normally didn´t carry flags  in action, but within my personal tabletop army they do.

Now they are ready for action and I am sure they will pop out because of their flags.

The normal soldiers are from my own small range of "DreispitzMiniatures" (https://www.hagen-miniatures.de/Testkategorie-17/figuren-20/historisch/17-18-jahrhundert-228/), the flag bearers are FrontRankMiniatures and finally the officers are Crusader Miniatures. The flags I used were made by "flags of war" (https://www.flagsofwar.com/) 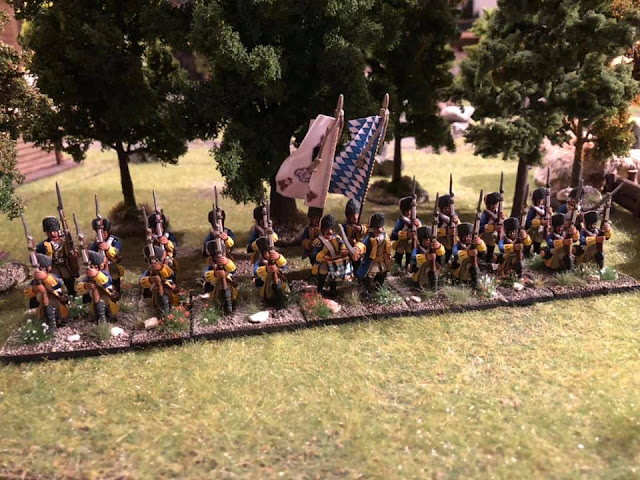 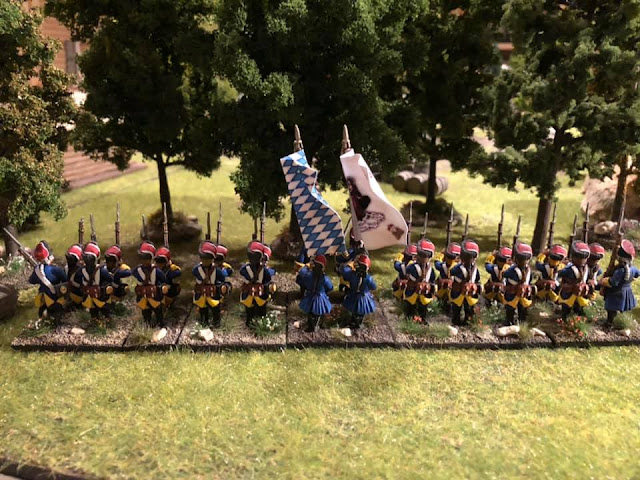 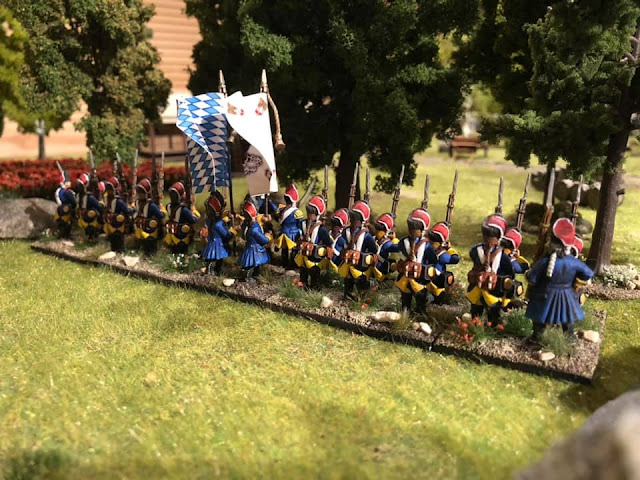 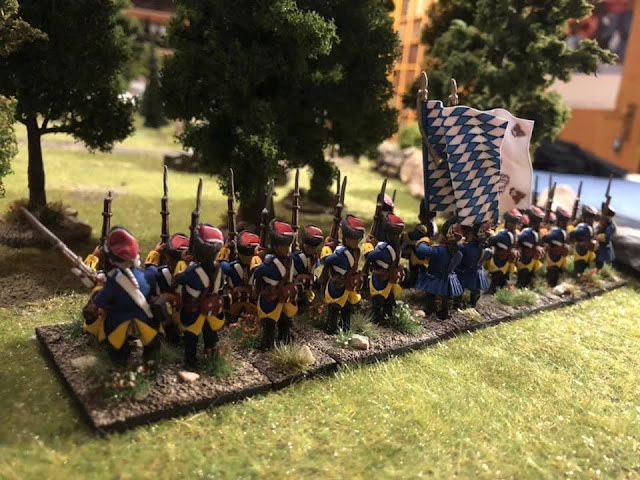 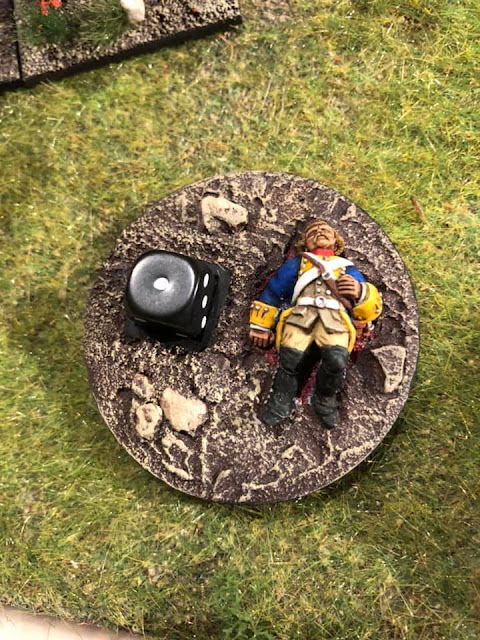 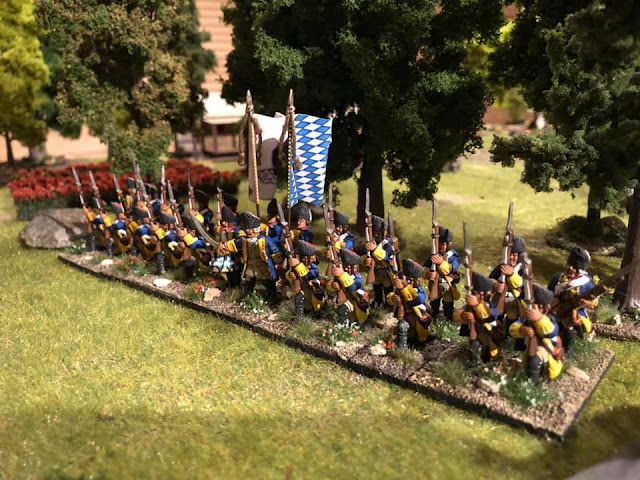 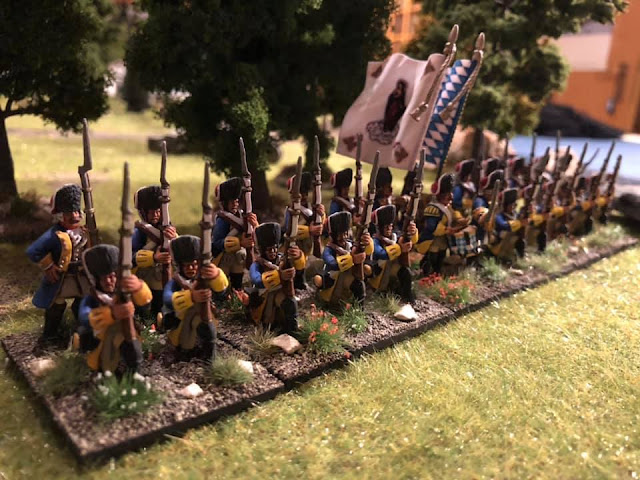 Manufacturer:  Do it yourself

today´s post is about my Mexican Cantina that I started to build during a workshop held by Gerard Boom of ShiftingLands (www.shiftinglands.com) about 4 years ago.

As usual I was very motivated and also made two posts about the WIP of this building.

But as always some other things made me forget the project and so it was another part of my pile of shame for quite a long time.

About six months ago I managed to finish this project and so here it is.

It was originally planned for Western rules like "Dead Mans Hand" but eventually it will also be used for peninsular war. 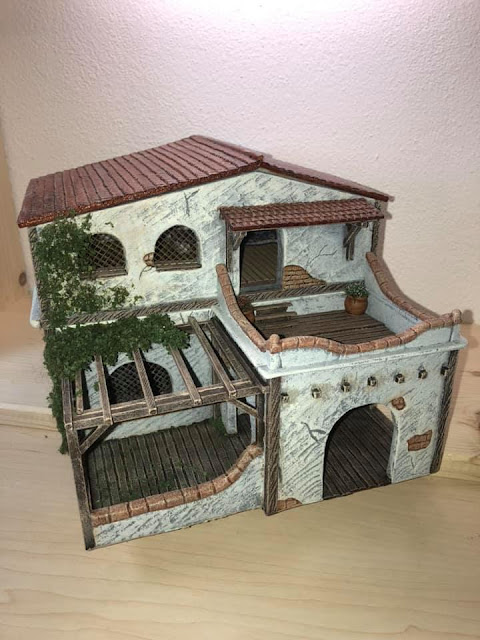 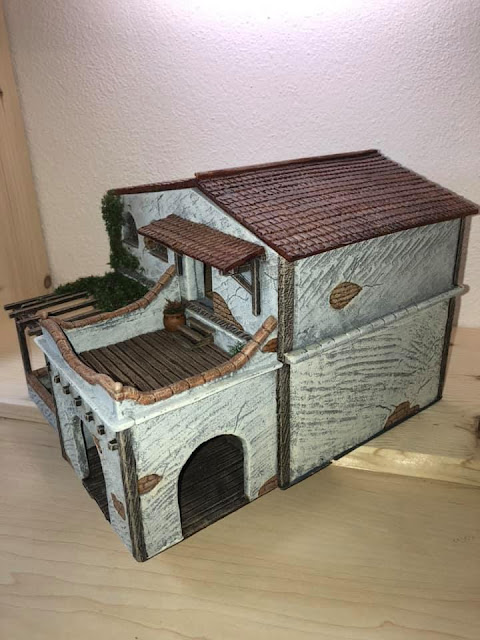 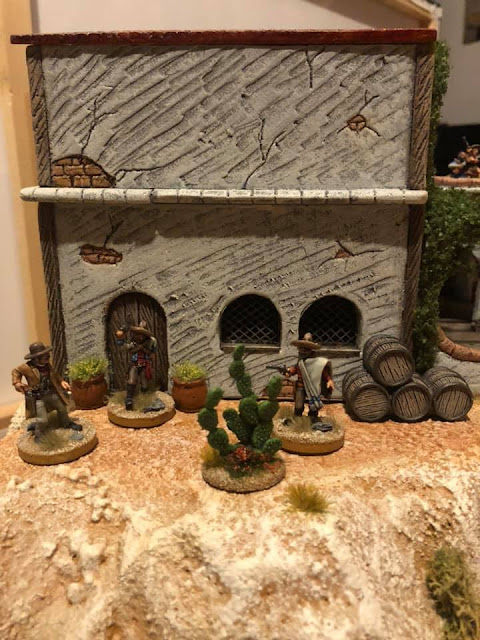 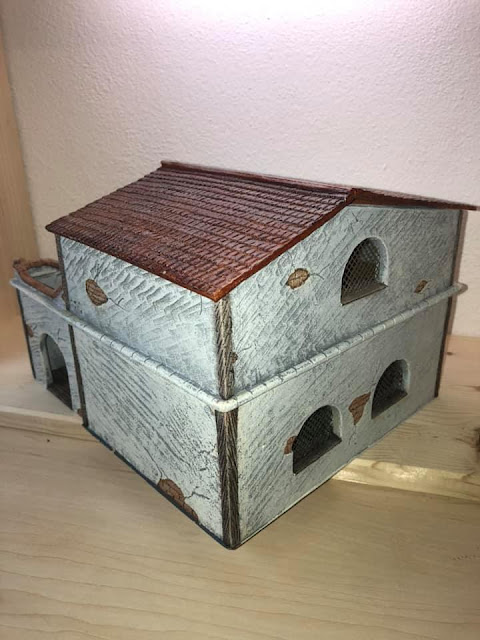 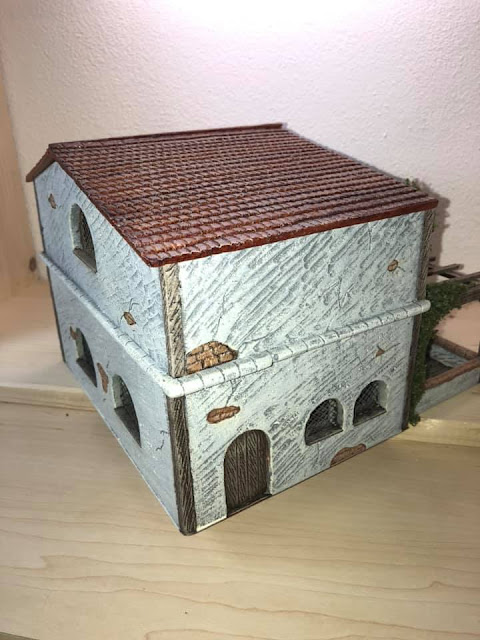 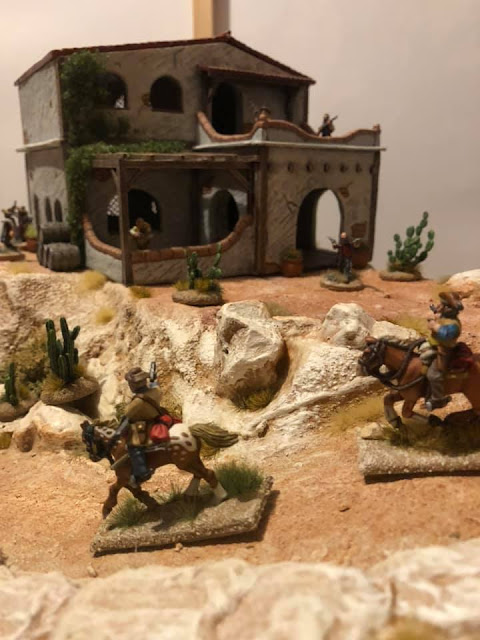 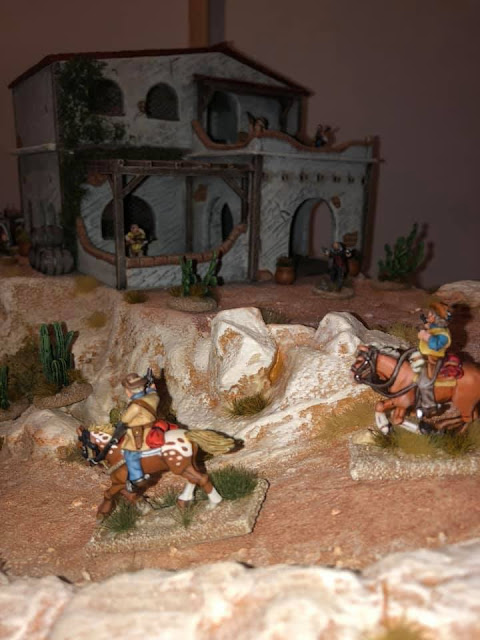 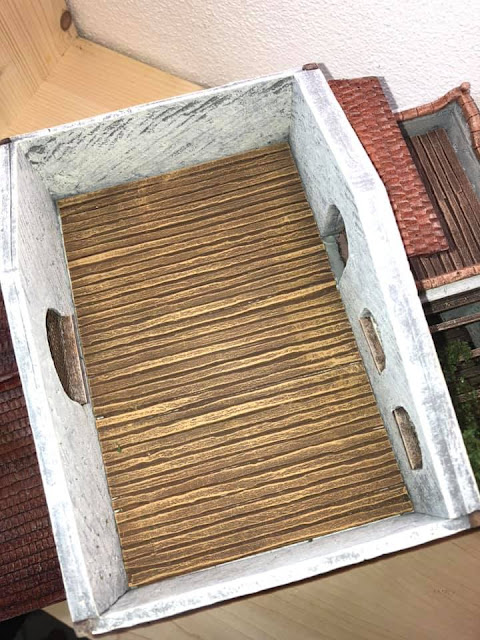 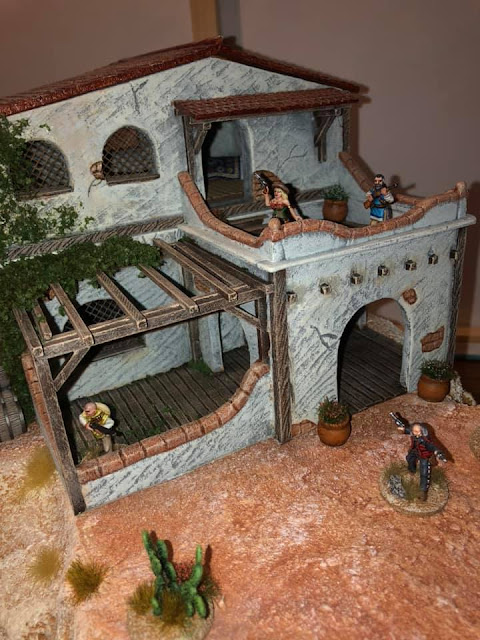 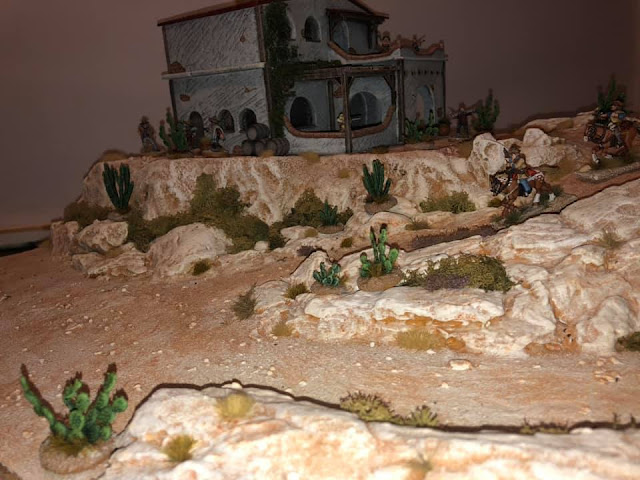 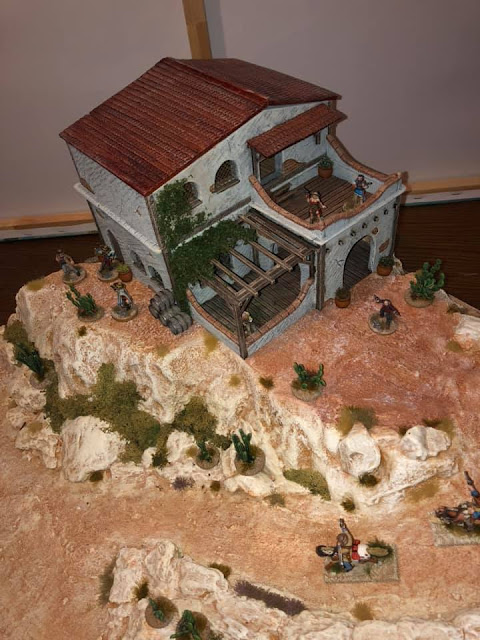 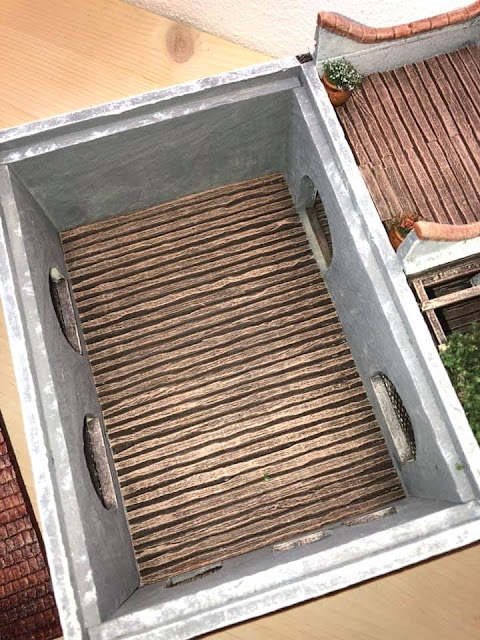 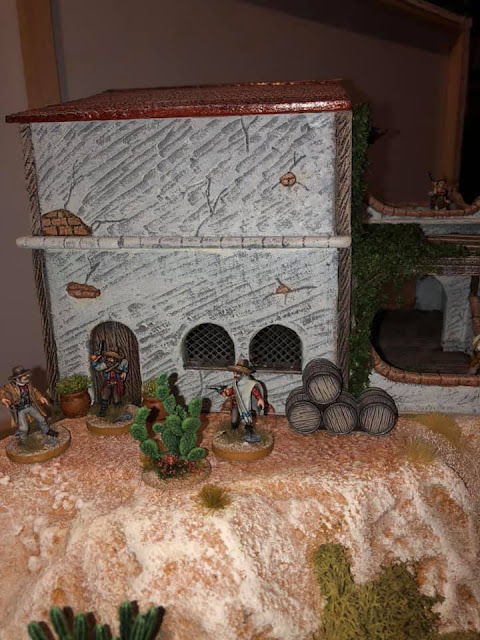 Email ThisBlogThis!Share to TwitterShare to FacebookShare to Pinterest
Labels: 28mm, Dead Man's Hand, Do it yourself, Hobby in general, Terrain

about three weeks ago we had a great game using the rules of "Muskets and Tomahawks - 2nd edition".
Two British ships had reached the shore near an American settlement that was held by an American force.
The British started to row their four longboats to the shore and got immediately under fire of the only American cannon. The first Shot was a already a hit and the British unit had to leave the sinking boat.
The British answered by firing their Swivelguns at the cannon and were able to cause two casualties. The other crewmen had been shocked and left the ground.
This took place within the first 15 minutes of the game. A very heavy start.
The other three longboats managed to reach the beach but got under heavy fire started by a unit of Minutemen. They had to stand against three volleys and got some casualties before they were able to form up.
It seemed that the Americans would win this game for sure.
But fortune changed and after a while the British managed to cause heavy losses on the Americans, too.
It was a fierce fighting and at the end it was a close run. A further moral card could break both opponents` moral. In the end the game ended with the fifth red clock card.
As always it had been a very good game. We didn’t play everything without making mistakes as we found out afterwards but we again learned very much about the rules.
A short episode of a funny situation within the game - the Officer of the British Provincials got under fire and had to do a reaction test. Its result was a „flight“ and he started to swim back towards the ships. I wasn’t able to rally him for four times and every failed attempt to rally this guy was followed by a test if he would drown. After the fourth attempt this happened.
We could not resist to make it a funny event and let him be attacked by a great white shark. So don’t be confused by the three photos here showing this little episode of the game. Silly, but funny :)